My weekend exploits at an amazing festival (or: nah nah-nah nah nah!).

I’m in my third week here in Conamara and for those of you who don’t know, Conamara is a region that stretches (roughly) from west by northwest of Galway town to Leenan along the coast and is bordered on the east by Loch Corrib and Lock Mask. I was supposed to go out to Carna for a spell to visit with Mícheál Ó Cuaig but he has surgery on his leg and I thought it best to leave him to recover without a stranger in his house! I’ll likely take a visit out to see him for a day or so this week. So, right now I’m staying with Mícheál Ó Conghaile in Teach Mór Thiar, which is situated just west of Indreabhán and just south of An Lochán Beag. He’s a lovely dry house that looks south onto Galway Bay and on clear days (and not so clear days)…

No, I have not forgotten how to type.

Another long silence and my apologies. Traveling around Europe while having fun is simply not conducive to keeping up on my blog. It has been three weeks since I posted last and in that time I have traveled to the Isle of Man, London and Berlin bookended with stays in Conamara (western Co. Galway). I’d like to focus on the Isle of Man in this post. Adrian Cain from the Manx Heritage Society brought me over to experience the community there and give insight in the Language Hunting. I flew on a prop jet from Dublin, which only took 45 minutes and as the plane descended onto to the island we passed through heavy fog. As legend has it, Mananán Mac Lir, the sea god, pulls his misty, foggy cloak around the island to protect it from invaders (some help that was!). The fog soon parted and there below us…

Sorry for the silence!

I must first apologize for the silence as of late as I have been sick. In fact, I’ve been sick since right around xmas and since I’ve been traveling for nearly as long, my poor little immune system couldn’t keep up the fight. I’ve had an unrelenting cough ever since I struggled back to life after my bout with flu in the States. That progressed into a sore throat and another bout with the flu! I swear to you that I’m not usually sickly. I think it all comes down to traveling on public transportation, visiting primary schools, and the unseasonably cold weather we’ve had here. I am, as they say, “ar dhroim na muice” but likely need to be cautious and literally stay in this warm and dry house that has been offered to me by my great friend Micheál out in Conamara in a town called Indreabhán. Needless…

This was an interesting read! Aside from the drama, the mention of two linguistic theories really lit a fire in my mind–those of the Sapir-Whorf hypothesis, which suggests that language shapes our experienced reality and the Conceptual Metaphor theory established by George Lakoff at UC-Berkeley, which states that the way we think and act is metaphorical in nature.

I’ve been thinking much on the extent to which the Sapir-Whorf hypothesis applies in Irish (most linguists would accept a “weaker” understanding of it). Recently, I’ve taken on the project of collecting “language softeners” (i.e. you know, on that same note, if only, etc.) and a third of them have no equivalents in Irish–neither in language NOR feeling in many cases. HOW CAN THIS BE?!? Well, it just is. Sin é! Having read the article mentioned above, I continued with how Irish shapes an understanding of things and to the extent…

So after many travels, the flu, and injuring my back, I’ve arrived in west Cork to the village of Béal Átha na Ghaorthaidh (Ballingeary) to stay with my friend Síle Uí Chróinín and her family. I had a day or so in Baile Bhuirne, which is on the main road from Killarney to Cork with Eilís Ní Shúilleabháin but decided since Síle had a larger home, children, dog, and was in a more isolated area it would suit my documentation and language hunting better. I’ve been here two days and the first thing I have to say is that I’ve slept horribly but in a good way. I’ve been only speaking in Irish and so at night when I’m trying to sleep, my brain is processing language like a freaking pinball machine. Phrases, words, questions, thoughts in Irish refuse to shut up. I’m being patient as this is likely a “dusting off” period. I suspect that once it’s all dusted off I’ll likely sleep better. Perhaps some of you have some insight into this with your own experience with language acquisition?

I’ve signed myself up for quite a ride to be in west Cork for three weeks, west Galway (Conamara) for three weeks and out on Tory Island in Donegal for three weeks. I don’t think I’ve bitten off more than I can chew but I will certainly be doing a shite ton of work because if I don’t I will be bored stiff! I’ve decided while in these areas that I’ll focus on three projects aside from just hunting on my own and practicing my language. First, I’ve created a roadmap in standard Irish so while I’m in each area I’ll work on augmenting this roadmap based on the dialects of the area. I’ll document speaking through the game with fluent speakers from these areas as well. Next, I’ll be volunteering and observing in the schools to grasp a better understanding of the curriculum and of the little songs, games, poems, etc. that children pick up here during their eduction, which is all through Irish. Finally, I’ll be collecting songs, stories, vocabulary, experiences of life in these various Gaeltachta to culturally supplement the roadmaps.

I’ve already had some great experiences. I’ve had two very deep conversations about the state of Irish in the west Cork Gaeltacht. These conversations verified what I’ve suspected for many years now and have voiced to my students back in the States; while Irish is thriving in use, it is falling in standard. In particular, Irish is becoming anglicized more specifically in syntax and loan words. Both of my friends have said that it’s worse than they initially suspected. 😦 There are many factors feeding this, non-Irish speakers moving into the area and enrolling in the local school, a falling level of Irish among the teachers, organizations choosing not to use Irish (such as the local Gaelic Athletic Association whose initial aim was to promote hurling and Gaelic football through the Irish language!!!), and a generally weak economy in the area that has non-Irish speakers traveling to the area to work or native speakers moving out of the area to find work. All sad stuff, indeed. I’m sure I will find just as many positive experiences to balance this out (I hope).

I went on an hour long walk with Síle yesterday and we discussed the land and its place names and the stories associated with them. This is a fairly common feature of the language called dinnseanchas. Béal Átha ‘n Ghaorthaidh is located at the confluence of An Bun Síleann and the River Lee (Abhann na Laoi) and the plain on which it’s situated was clear cut to create it (sound familiar to Portland?!?!) so Béal = mouth, Átha = ford, Gaorthaidh = cleared plain of stumps. We worked through the names of trees, plants, moss, streams, etc. and the local lake named after the serpent who was cast from the land by St. Fionnbarra, which formed the pot (source) of the river Lee, which flows through the town of Cork. ALL SORTS OF AMAZING STUFF THAT IS SURE TO MAKE YOU JEALOUS.

More to come later. I’ll try to do a write up each day. Soup is on–anraith le fáil! 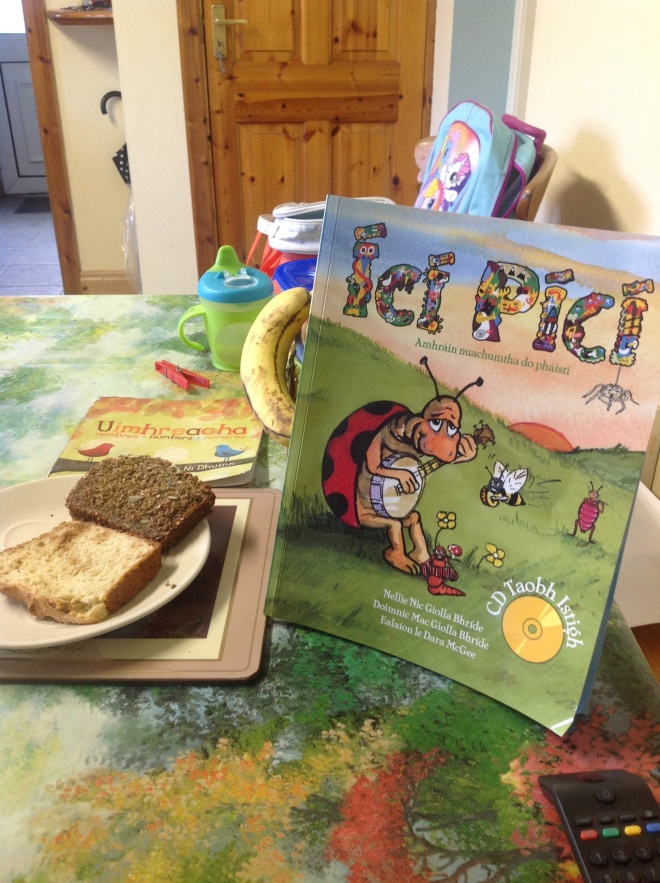